Last weekend the chicken watch began.  I was lucky enough to have been offered the loan of an incubator and some eggs to try to hatch.  Things were touch and go at one point with a storm and 6 hour blackout but we kept fingers crossed that the eggs would be ok. 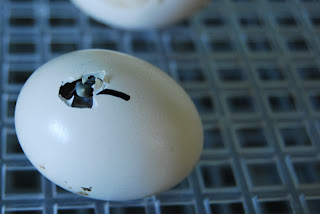 The first chick 'peeping'.  Did you know that you can hear the chickens cheeping in the eggs before they have even peeped a hole?  It was an exciting moment! 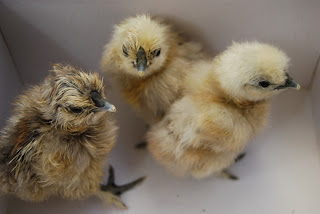 And the three chickens that hatched!  Two chicks died while hatching which was a shame but I am thankful for these three fluffy babies.  They are living under a warming light in my laundry for the next 5 weeks and then they will be old enough to go outside.
I wonder what sex they are?
Posted by Becky at 8:11 PM 1 comment: